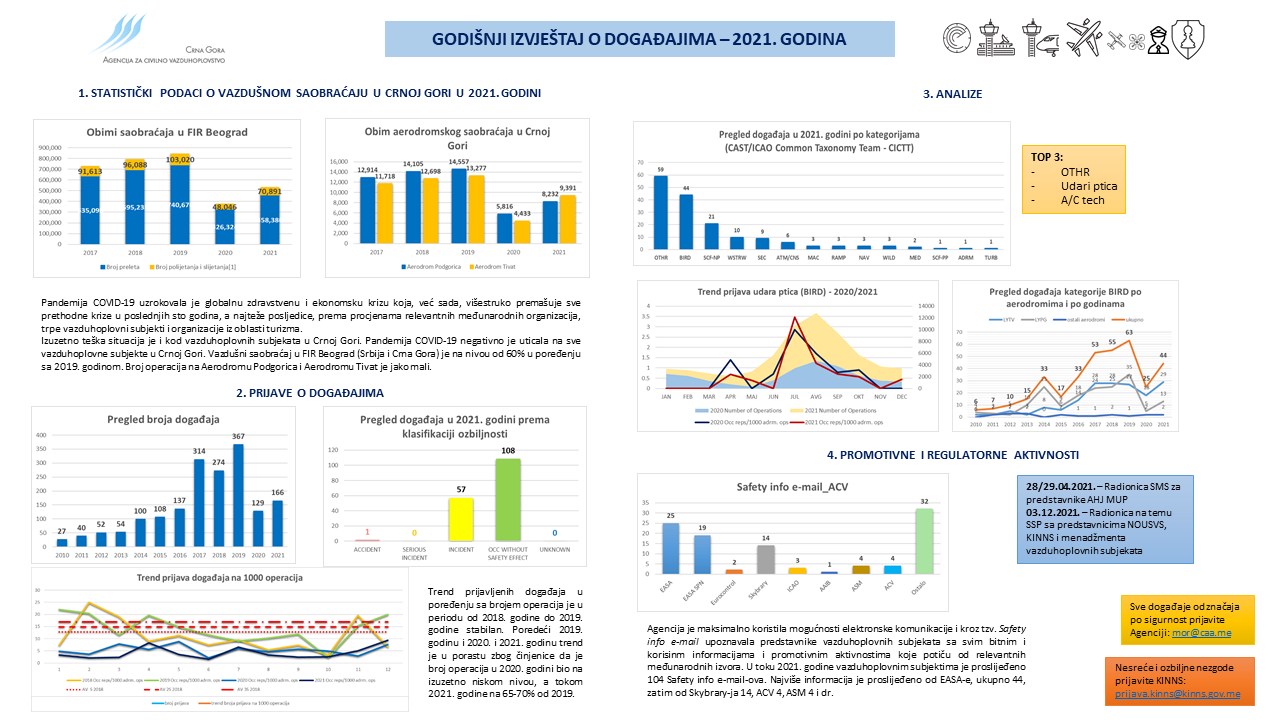 Occurrence Report for 2021 was adopted.

In 2021, a total of 166 occurrences in civil aviation were reported in Montenegro, one of which was classified as an accident, without casualties, it was concluded in the Annual Occurrence Report for 2021, which was adopted by the Civil Aviation Agency. The aim of this report is to improve air traffic safety, determine the circumstances and reasons of the occurrences, as well as to promote measures for prevention of recurrence.

This year, like the previous one, was marked by the impact of the COVID-19 pandemic on the level of air traffic over the territories of Montenegro and Serbia (the airspace in which SMATSA llc provides Air Navigation Services), and because of that the volume of traffic is at slighly over 60% compared to 2019. However, there was a growth of about 40% compared to 2020, which is a clear sign that the level of air traffic is recovering. The total number of civil aviation safety occurrences, reported to the Agency during 2021 on the territory of Montenegro and abroad, in which aircraft registered in Montenegro took part, is 166. One occurrence, an accident, was investigated by the Investigation Commission of Accidents and Serious incidents of aircraft.

The most reported occurrences are from three categories:

Analyzing other categories in the reported occurrences, a relatively stable trend of occurrences is identified related to the security (SEC), where there are mostly occurrences caused by laser interference and unruly passengers, WILD category occurrences, ATM occurrences, etc.

Based on the above stated, it can be considered that the air traffic safety in Montenegro is at an acceptable level, where it is necessary for aviation entities to realistically look at the trends of their own operations, identify hazards, analyze risks and propose measures to reduce such identified risks. This kind of approach of aviation entities enables the creation of an efficient safety management system, management of all analyzed risks and efficient monitoring of the trend of air traffic operations in Montenegro.

The Agency will, through regular supervision and inspections, check and determine the level of implementation of the above stated, as well as the actions of aviation entities in accordance with the positive trend of their own operations and identified hazards.