The Civil Aviation Agency celebrated 10 years of its work

The Civil Aviation Agency of Montenegro celebrated 10 years of its existence, and in the first decade it was developed into sound and credible aviation authority. The results of the Agency were recognised by all the most important institutions and organisations in Europe, and by the United Nations as well. Montenegro is among the highest ranking countries as regards the compliance with international ICAO standards in civil aviation, and it is also part of the One Stop Security system, i.e. it applies standards equivalent to the standards in the European Union member states.

"Today, ten years later, we have the Agency whose quality and results are... OPŠIRNIJE 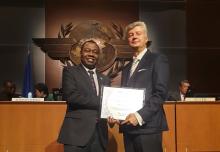 At the ongoing session of the General Assembly of the International Civil Aviation Organization (ICAO), the largest aviation institution of the United Nations, Montenegro was granted the recognition for noted results in commitment and the development of aviation safety.

The ICAO Council President, Dr. Olumuyiwa Benard Aliu granted the plaquette, i.e. the Certificate to Montenegro in Montreal, stating that he is honored to recognize the efforts of Montenegro for its progress in 2018 in resolving aviation safety oversight deficiencies, and for its ongoing commitment to the effective implementation of ICAO Standards and Recommended Practices.

Dragan Djurovic, Director of the Civil Aviation Agency of Montenegro, who is also the chief delegate... OPŠIRNIJE

In accordance to the Decision on the manner of calculation of terminal charges for air navigation services of the Government of Montenegro (“Official Gazette of Montenegro”, number 53/19), terminal unit rate for services provided by SMATSA LLC to aircraft taking off and landing using airports in Montenegro shall be set to (as of September 16th, 2019):

The following flights shall be exempted from terminal charges:
(1)   flights performed by aircraft with maximum certified take-off weight less than 2 metric tons;
(2)   search and rescue... OPŠIRNIJE