9 years 8 months
Meeting of the Directors General of the aviation authorities of the Balkans, Antalya, Turkey, October 26-29, 2010

Director of the Civil Aviation Agency Dragan Djurovic and his associates participated at the Meeting of the Director General of the aviation authorities - The Balkan Aviation Summit, which was held in Antalya from October 26 - 29, 2010.

The meeting was held by the CAA of Turkey. The meeting was attended by representatives of the aviation authorities of Turkey, Serbia, Macedonia, Bosnia and Herzegovina, Montenegro, Croatia, Albania, Kosovo and Moldova.

The participants of the meeting approved the Declaration on the development of cooperation among the Balkan countries in the field of civil aviation, signed by dr. But Ariduru as chairman of the meeting.

Defense Minister Boro Vucinic and Director of the Civil Aviation Agency Dragan Djurovic today discussed civil-military coordination in the field of airspace control and surveillance, and a plan of concrete activities was agreed in order to define this important area.

In this regard, it was concluded that the Government is proposed to establish an inter-ministerial expert working team, which, in accordance with the results and recommendations of the studies conducted by the experts of Montenegro and NATO and the requirements of the EU, defined the priorities and the preparation of the elaborate for the regulation of the new radar position . The Expert Work Team would also be in charge of preparing the implementation of the concept of flexible use of airspace. 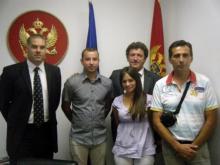 Regarding the granting of first licenses to parachuters after more than 30 years, the Agency for Civil Aviation of Montenegro provides information:

For years, our aviation sports fans trained and obtained permits abroad. Even the oldest airliners do not remember the day the last time the parachute licensing exam was organized in Montenegro.

These days, the Civil Aviation Agency conducted the first laying-off of the theoretical and practical part of the parachute exam after more than 30 years.

Both candidates showed a high level of necessary... OPŠIRNIJE