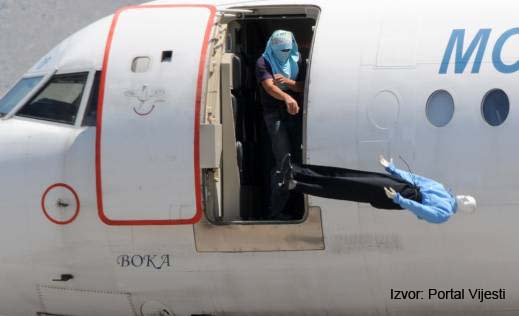 At the Podgorica airport, July 19, 2011. Security Safety Training "Abduction of Aircraft" was held in accordance with the National Air Traffic Safety Program, adopted by the Government of Montenegro and ICAO international documents. It is one of the most complex and demanding practices of unlawful interference with air traffic, since it involves the engagement of a large number of participants and competent authorities.

The aim of the exercise was to train and verify the system of notification and coordination of activities between competent authorities and institutions, quality control of adopted legislation, plans and procedures in case of abduction, as well as testing facilities / equipment for crisis management and airport crisis center.

The exercise simulates the abduction of the plane on the Frankfurt-Podgorica line.

The flight of Montenegro Airlines (Foker 100) on the flight 777, with 39 passengers (most Montenegrin citizens, 5 passengers of German citizens and 2 passengers of US citizens) and 6 crew members, took off from Frankfurt airport at 9 am Podgorica.
15 minutes after the take-off of the aircraft, the armed men took control of the plane by requiring the pilot to listen to their instructions and to comply with the flight procedure.
After the landing at the airport in Podgorica, the hijackers contacted the negotiator and submitted their terms.
The negotiating team tried to make reasonable decisions with them. Dissatisfied during the negotiations, the hijackers are killing one passenger at one point and throwing his body out of the plane, announcing that every next five minutes will kill one passenger.
After that, the State Crisis Staff decided that special anti-terrorist units would fall into the airplane, which was immediately done. Three kidnappers were killed and two were arrested.

Participants of the exercise are:

1) The State Crisis Staff, consisting of the President of Montenegro, Prime Minister, Ministers of Transport, Internal Affairs, Defense, Justice and Foreign Affairs and European Integration,
2) The national crisis team comprised of members of the National Air Safety Committee,
3) Crisis team of the airport, made up of members of the Local Committee for the Safety of Air Traffic
4) Civil Aviation Agency,
5) The Police Directorate, in particular the Border Police Branch at Podgorica Airport and the Special Anti-Terrorist Unit of the Ministry of Interior
6) Terminal flight control-Podgorica,
7) JP '' Airports of Montenegro,
8) Montenegro Airlines.

By the resolution of the so-called " crisis situation of abduction of the aircraft, was managed by the State Crisis Staff, which was in charge of making strategic and political decisions in coordination with the State Emergency Response Team that made decisions at the operational level.

The exercise was completed very successfully and showed the readiness and training of all authorities and institutions in simulating the resolution of the crisis situation.

Montenegro is obliged to implement this type of illegal air traffic interventions at least every two years as required in the international documents to which it is a signatory.

The results of the exercise will be presented to the relevant European Commission bodies and the European Conference on Civil Aviation (ECAC), and certainly contribute to assessing Montenegro as a European destination for a high level of air traffic safety.