Heads of the ECAC have visited Montenegro 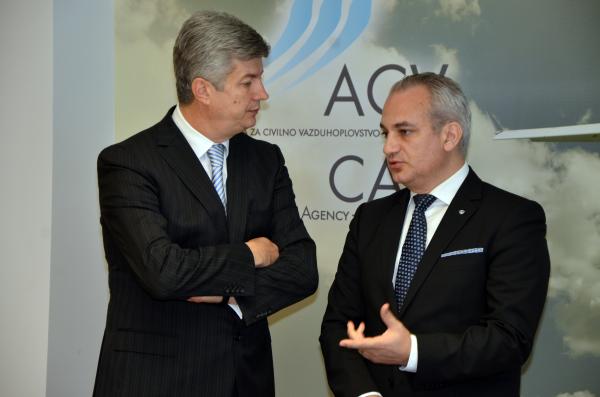 Podgorica, February 19, 2014 - The highest officials of the European Civil Aviation Conference (ECAC) are staying in the first official visit to Montenegro today, within the framework of which they met with Director of the Civil Aviation Agency Dragan Đurović. ECAC President Katalin Radu and Secretary General of this aviation facility, Salvatore Sakitano, spoke with Montenegrin counterparts on the situation in the field of civil aviation and current projects aimed at achieving an even greater degree of security.

ECAC President Katalin Radu said that he was impressed with the results of the work of the Civil Aviation Agency of Montenegro, based on the application of European and international standards. "Air transport is one of the most important modes of transport, which is why it is very important that each country provides conditions for its security and safety. Montenegro, through the application of standards, is doing it in a good way, "Radu said, adding that the standards were met thanks to the expert staff working in the Agency.

Director of the Civil Aviation Agency Dragan Djurovic said that ECAC's visit was a confirmation of the permanent development of civil aviation in Montenegro, during which a system with many serious shortcomings resulted in a system that could serve as an example to countries in the region. "Now we have a situation in which the highest aviation authorities of Europe judge that Montenegro is at the top of the world's countries for the harmonization of the civil aviation security system with international standards."

Thanks to the significant progress made in the field of civil aviation in recent years, ECAC Montenegro has chosen Montenegro to, along with Turkey, be the beneficiary of the "One Stop Security" project that started in January.

Radu said that the activities from this project would facilitate procedures for airport passengers and improve connectivity and free movement. "A passenger on the route Podgorica - Vienna - Brussels will undergo control at the Podgorica airport, but will not have to be controlled in Vienna," explained Radu.

He announced that in April, within the project, the system of civil aviation will be conducted. With the successful completion of this one-year project, Montenegro will be in a position to be recognized as a country that implements equivalent security measures as well as EU member states.
Montenegro became a full member of the ECAC in June 2008. The main goal of ECAC, which has 44 member states, is to create a safe, efficient and continuous European air transport system through the harmonization of the management of this traffic among members.

Photo gallery can be found here